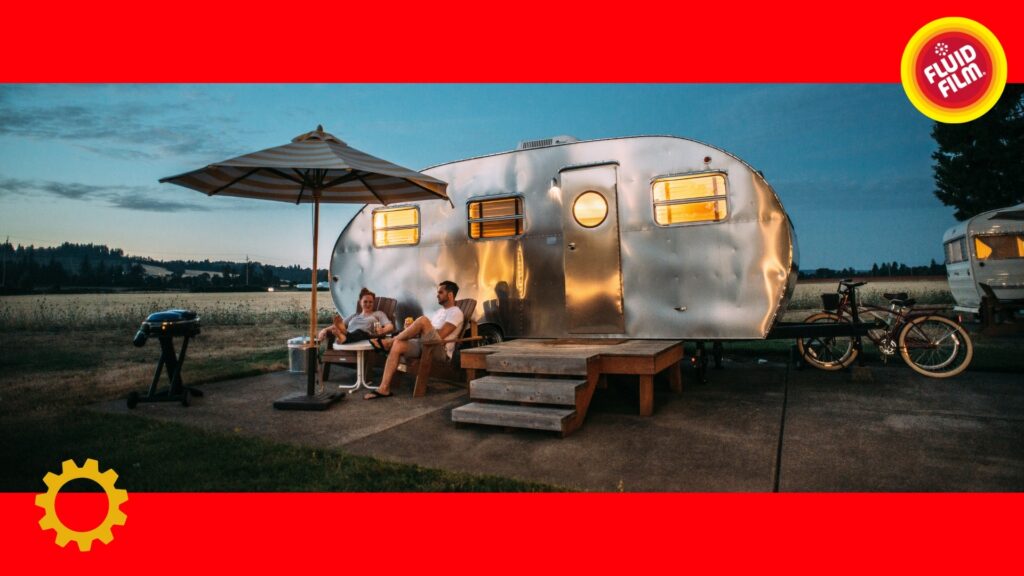 Colin is one of Fluid Film’s newer customers, having come across it in the last 12 months. He heard about the product on Facebook and decided he’d try it for himself and get a head-start on rust prevention.

“I liked the idea and thought it’d be perfect for my vehicles,” he told us.

Colin applied Fluid Film to his caravan and car; on the back, all over the hinges and over the car’s tow ball. Since applying, he hasn’t seen any sign of rust on the vehicles.

Fluid Film is leading the way in anti-corrosive products!

Consistent exposure to a wide range of elements can lead to rapid deterioration of metal – not only resulting in poor appearance and loss of value, but potential safety issues as well.

Designed to lubricate and stop rust on all types of metal, Fluid Film’s non-toxic, non-hazardous, easy to use solution will stop rust forming on your metal linkages and equipment – big or small.

With the anti-corrosive, natural moisturising and water-repelling properties of lanolin, Fluid Film provides long lasting lubrication while displacing water and moisture at the same time. So, worry less about rust damage and have heaps of stress-free outdoor fun with Fluid Film!

“It’s still early days but from what I’ve seen so far, I’m very hopeful,” Colin said. “I mainly use it on the caravan, but I’ve recommended it to my son-in-law for around the house jobs,” he explained.

Colin admitted he was amazed by the product.

“I’ve tried other anti-rust sprays and gels, but I was surprised by the consistency of Fluid Film,” he said.

Because it doesn’t get gummy or stiff, Fluid Film’s lanolin-base makes it quite light.

Fluid Film doesn’t stick! Its non-toxic solution is light and safe on skin

“I’d spray it and it would quickly run and seep in, a little certainly goes a long way,” Colin added. Fluid Film often surprises customers by the finish it leaves. In Colin’s case, it created a glossy shine which was visually appealing, while protecting the paintwork from bugs and mud with its smooth waxy surface on the exterior. “It’s great when a product delivers more than expected,” Colin admitted.

“I’m happy with it, I only wish I’d found it sooner,” Colin said.

If you’re looking for the best in long lasting rust protection, look no further. Fluid Film is your one-stop solution for your rust problems. If you wish to know more information about this product, or would like a free sample, please get in touch.