Fluid film: a product and service you can rely on 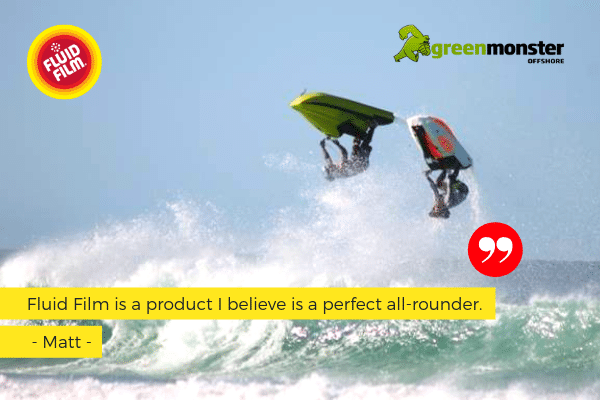 Now employed with equipment rental company, Green Monster, Matt first came across Fluid Film at his old job. After trying the product and loving it, admitting it’s “one of the best products” he’d ever used, Matt decided he couldn’t keep Fluid Film to himself when he started with the team at Green Monster.

Fluid Film has worked as a great lubricant and anti-rust device on the Green Monster wire ropes, among other things.

“It’s a product I believe is a perfect all-rounder,” he said.

Continuing to pursue his passion for all things mechanical, Matt uses Fluid Film on his own gear at home.

“I use it on all my jet skis, the engines I build, when building carburettors, any steering and throttle cables, pump housings, as a general lubricant on working components, all sorts of stuff,” Matt said.

Clearly a great solution for Matt’s mechanical equipment, we were very interested in learning more about his jet skis.

Between his work and busy life, he admits he hasn’t had much time to dedicate to skiing as of late but has taken part in some impressive challenges in the past.

“I’ve been to a few world titles, both here and overseas, and have had a few sponsors under my belt,” Matt said.

We think it’s safe to say Matt knows a thing or two about jet skis and high-powered equipment – especially the problems that can arise from water coming in contact with the metal parts of these products. That’s where Fluid Film comes in to save the day again.

“I use it for a few of the same things in my workshop; steering and throttle lubrication, carburettor linkage lubrication, jet pumper housing lubrication, cylinder lubrication, crankshaft assembly and lubrication, any nuts and bolts – you can use it for anything, so basically anywhere I can, I spray a little of it. But I also like to spray some Fluid Film all over the engine to act as a saltwater protectant, keeping the working parts safe from corrosion,” Matt said.

Matt has found other Fluid Film enthusiasts along the way, like David and Craig from Stott Industrial.

“I’ve worked with them a little and their service was unbelievably brilliant. I’ve been in this industry a while and, as a workshop manager, they are the best, hands down,” Matt said.

“They always go above and beyond and are simply some of the friendliest, most knowledgeable people I’ve ever spoken to – it’s like we’d known each other for 20 years and we’re best mates,” Matt said.

To put our service to the test, get in contact with our team today! Or try Fluid Film for yourself, by ordering a free sample.