Stop rust on your car and motorbike 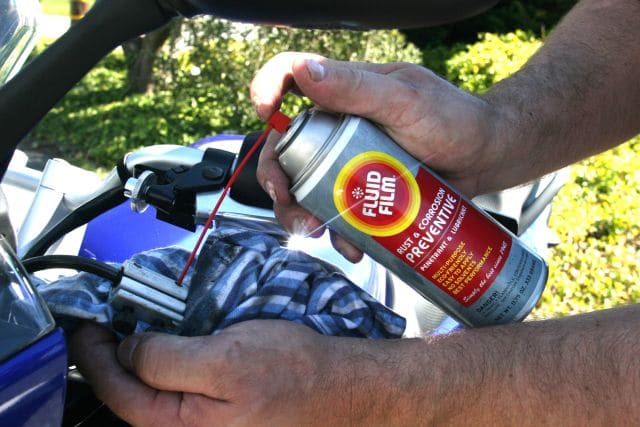 Rust can permanently damage some types of metal found in your car and motorbike.

Although rust starts like a speck of dust, it can spread quickly and before you know it, the rust has eaten away the metal.

We all know that the best way to keep rust at bay is through proper care and maintenance but sometimes they aren’t just enough.

We’ve found that one of the most effective ways to reduce the risk of rust formation is by using a protectant fluid.

So that’s where Fluid Film comes in. If you’re wondering how this product can eradicate rust on your precious car or vintage motorbike, read on …

Salt, chemicals, dirt and debris on the roadways are the biggest culprits of rust. They can stick to vehicle underbodies and eat away at metal and electrical connections. In addition, constant exposure to air and other elements makes your vehicle’s metal parts vulnerable to rust and corrosion.

Applying Fluid Film to exposed metal components such as gears, chains and brake cables protects them from the corrosive effects of roadway chemicals and the elements.

Fluid Film has the ability to penetrate to the base metal and even to the most inaccessible areas in your vehicle.

Once it comes in contact with the metal, it leaves a waxy film that will neither chip nor crack, hence providing a protective barrier for long periods of time.

Fluid Film’s unique formula not only stops existing rust on contact but also offers long-term lubrication for all moving parts. Its lubricating properties can penetrate to the tiniest metal part and will not get tacky.

You can use it to lubricate your bike’s metal parts including the chains, brake cables, seat posts, nuts and bolts.

Fluid Film also works great in keeping car locks, hinges and seat tracks from freezing, even in sub-zero temperatures. So save yourself from the hassle of going to a lock repair shop. Salvage that lock with Fluid Film.

Whether to stop squeaks, loosen stiff links on chains, or avoid getting heavy dirt build-up, Fluid Film is the perfect lubricating solution for bikes and other recreational equipment.

If your vehicle’s paint and undercoating are of concern, we can assure that Fluid Film is safe for use on all types of metals and isn’t harmful to most paints or plastic.

It gets rid of rust quickly without harming surrounding parts or paint. In fact, many users found Fluid Film to be a cheaper and more effective alternative to the standard hard-underbody coatings.

Restore your vehicle’s former glory and bring that shine back with Fluid Film. For more details, contact us today – or try the product for yourself with a free sample.